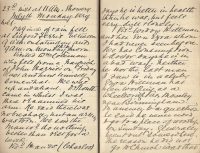 Very wet. 1.49 inches of rain fell at Sibford Ferris between 9 am on Saturday and 9 am on Monday (this) morning.

Visited William Coleman who fell from a hayrick of John Harris’s on Friday last and hurt himself somewhat. He was up and about. Dr Routh came in whilst I was there and examined his arm. He said there was no breakage, but an artery was torn. He said the man could do nothing better than rest for a week.

Visited Hands (Charles), says he is better in health than he was but feels very dull and lonely.

Visited Widow Hillman and her son Ezra whom I had never seen before. He has consumption and doctor says he is in a bad way. Neither he nor the last man I saw is in a club. Ezra Hillman has been working as a wheelwright at Moseley near Birmingham. In answer to a question he said he never used to go to a place of worship on Sunday, generally went out somewhere. The reason he did not go to church was that there was no one to go with. He was baptized at Sibford. I read and prayed with him; gave his mother 3/- and told her she might send for some wine for him if Doctor would let him have it.

Julia Hillman the daughter who used to be in my service came in just as I was coming away. She has a situation at Drayton near Banbury. But she was here not long ago; at the Club day I think.

Visited Michael Austin’s. He was not at home but I saw his sister Mrs Coles and her husband.

Visited Dr Routh but he was not at home.

Mary Ann Coleman daughter of William Coleman came and said her father had sent to ask whether I would give his youngest daughter Annie a pair of boots as she is going to service at Mrs Coles’s till Michaelmas. I ordered a pair for her.

Wrote to Stephen Hands and John Horsman about the fixing the Kitchener and copper at the farm, giving the latter a caution as to giving the Feoffees good labour for the time he charged them. Stephen Hands told me that when Horsman was at the farm at work he did not get there till 8 o’clock in the mornings and frequently left off at 4 in the afternoon.