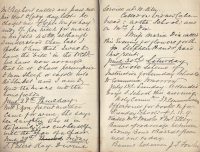 Visited Mrs Mawle and Mr Elley. Banns of marriage between Sidney Bond and Harriet Green were out today. Banns between J. S. Fowler, Butcher and Sylvia Bishop daughter of Mrs Bishop at the Wykeham Arms and a member of our choir were put up.

James Barnes is better but not able to take his duty.

The remains of the late Mr Ellis were buried this afternoon at 4 o’clock. He married a daughter of a Mr Tennant who rented a small farm belonging to Mrs Cooper, sister? of Mrs Mawle at the Cross, afterwards held by Tennant junior, then by the widow of the carter, now by Geydon son-in-law of Widow Cakebread. Mrs Ellis is much younger than her husband was. He was 75. He had carried on a farm near Moreton in Marsh belonging to Lord Redesdale for many years, but having been very unfortunate he had to leave. I learn that Lord Redesdale gave him £500.