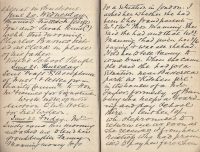 Mrs Lively came this morning and asked me to lend her grand-daughter Fanny Manning money to go to a situation in London. I asked her whether she had been to her parents Mr and Mrs Thomas Manning. She said she had and that Mrs Manning had given her 2/6 saying it was all she had. I told her to tell Fanny to come to me. When she came she said she had got a situation near Battersea Park as “kitchen girl” in the house of a Mr Taylor, formerly of Banbury who keeps a boarding and day school there. I lent her 10/- which she promised to return me as soon as she received it from her mistress who had promised to pay her fare when she arrived.

Visited James Barnes who had a fainting fit this morning and has been in bed ever since; though he had been up and about the house and garden all the week.

Visited Mr Ellis and saw him, but as he was asleep I did not disturb him. Mrs Ellis said he had taken almost nothing during the past three or four days. He looked much worse than when I last saw him.

Reproved William Sabin and Lines of Sibford Ferris for playing “cricket” in the roadway at Sibford Gower. Lines threw what appeared to me to be a stone but which he said was a ball in front of my horse as I was driving along the road which was covered with stones, some of them very large ones.

Stephen Hands should have paid his rent yesterday, but as he did not I sent Mr Elley up to him with a note requesting payment and a receipt. Mr Hands was not at home and therefore he left the note, bringing back the receipt.

Received from the Charity Commissioners the “Lease for a year” dated 1824 belonging to the Town Estate together with a letter respecting the present property of the Charity. I acknowledged the receipt of the former and gave particulars of the latter.

Benjamin Messenger called last night and I gave him the task of cutting the hay in the Slinket which he undertook to do for 8/- all included. He with the help of his sons have cut it all down today.