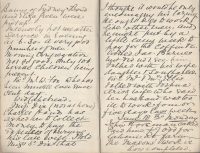 John Horsman called. Paid him £7 odd for labour at farm. The masons’ work is now completed. He told me that an old man named Lines died at Sibford Ferris last Saturday. He had been living at Tysoe for 30 years till within the last few weeks. He was over 80 years of age. This is the first I have ever heard of him.

Charles Barnes called and asked whether I could marry Fox and Webb on Wednesday next at 11 am. I said I could.