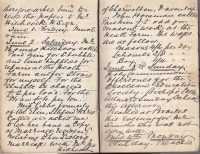 Club day. Preached to members this morning. Service at 11. No farmers present.

The Hon. Members have all withdrawn from the Club, for the present at least, owing to the conduct of some of the union men. Mr William Fox was the only new member present at the dinner besides myself. He was there as Auditor. Over £80 was paid last year for sick members. Golder made public allusion in a speech to the absence of the Hon. Members, endeavouring to exculpate himself from all blame, and talking a good deal of cant.This made it necessary for me to speak on the subject and my remarks were very well received.

Some of the younger members had drank too much which caused the proceedings to be somewhat noisy both at the dinner and at the supper in the evening, which I attended. The noise of the Chairman (Kay) and others good-naturedly endeavouring to keep the others quiet added to the confusion. There was some fighting after supper in the roadway in front of the schoolroom, between Ambrose Lines and Mr S. Woolgrove’s carter. I separated them, but an old man Reason and another who appeared to have had too much to drink urged them on again. I brought the two policemen up from the Cross and matters went on more quietly. By 10.30 the village appeared to be wrapped in slumber.

I told the officers of the club that unless they made rules to prevent drunkenness and disorder at the dinner and supper next year I should refuse them the use of the schoolroom.

I had a long talk with Joseph Hawke (Alcock) one of the stewards who complained that he had been challenged to fight several times during the day and had been otherwise much insulted. He said there ought to be more Christian unity. I said there ought and asked why he and others broke that unity by leaving the Church and becoming Methodists. His best reply was that our Church did not give scope to such as he to pray and preach in the congregation.

He said he had been out of work half the winter and been hard put to it to live. That if he had had half an acre of ground he might have put his labour into it. He said he did not come to me about the matter because he had not the “cheek”. I told him if he would write a letter to the Feoffees and get it signed by all who would like half an acre I would present it and it should be considered. He said he was afraid he would not be able to express himself properly. I told him if he would come down to me some evening I would help him or even write it for him. He expressed his thanks and altogether seemed gratified by my talking to him.

William Keene was present and of course I took the opportunity of speaking my mind about Mr Joseph Arch. Alcock said he was sorry to say that “Joseph Arch the President of the Agricultural Labourers’ Union was not the same humble minded Christian man as Joseph Arch the Barford Peasant.”

I visited Mrs Charles Hands this morning. She seems as though she could not last many days.

Press cutting from the Banbury Guardian of 14 June 1872

SIBFORD CLUB. – On Monday week the members of this Club assembled in the National School at Sibford Gower, to celebrate their annual feast. The weather was all that could be desired, and by an early hour in the morning the little village was all astir. Shortly before eleven, the members marched in procession (headed by the Banbury Volunteer Band} to Church. The text was the 23rd verse of the 14th chapter of Proverbs, “In all labour there is profit”, from which Mr. Stevens preached an excellent sermon. The dinner took place in the school, and speeches were delivered. Although there has been a great deal of sickness in the Club during the past year, £365 is standing. This year it was agreed to admit members three years younger than formerly which will doubtless do a great deal to strengthen the funds.