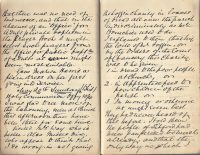 Whit Sunday. Holy Communion: offertory 10s 10d. I was glad to see more of the labouring men at church this afternoon than have been there for some time.

Visited Mrs Way who is better. Also Misses Dix, who appear to think that I do wrong in not giving the Loggin charity in loaves of bread all over the parish indiscriminately as Mr Bourchier used to do. I explained to them that by the will of Mr Loggin, or by the orders of the Council of Chancery this charity was to be given

They had never heard of this before. I told them the people of Sibford had been pauperised too much already and that the only way in which I could conscientiously bestow this charity was in assisting the sick and needy.

They thought it better that the clergyman should not have anything to do with the charities as poor persons became dissatisfied and his spiritual influence was lessened.

I told them that it was a very unpleasant duty and one that took a good deal of time, especially in connection with the town estate, but that I did not know any one who could be asked to give the necessary time and attention to it, and they said the farmers were not sufficiently educated. I replied that unpleasant as the duty was, I felt bound to accept it when the feoffees asked me to do so as there was no one else.

I removed the Charity Commissioners’ notice of new feoffment from the church door today.

I learn that William Kay and Joseph Alcock, two violent Methodists, are getting up a a petition to have me (and all other clergymen, so I understand) removed from the administration of the charities of this and other parishes.

I told Misses Dix and one or two other persons that if I refused to do it here it would probably have to be done by a solicitor in Banbury who would charge nearly half the income of the charity for his trouble.

Visited Henry Sabin and his wife. The former has had a relapse, the latter is better.

Visited Mrs Ellis, did not see her husband.

Visited Thomas Wilks and had a long conversation with him. He said that his name had been affixed to the above mentioned petition without his permission and that he had ordered it to be erased, so I understood.