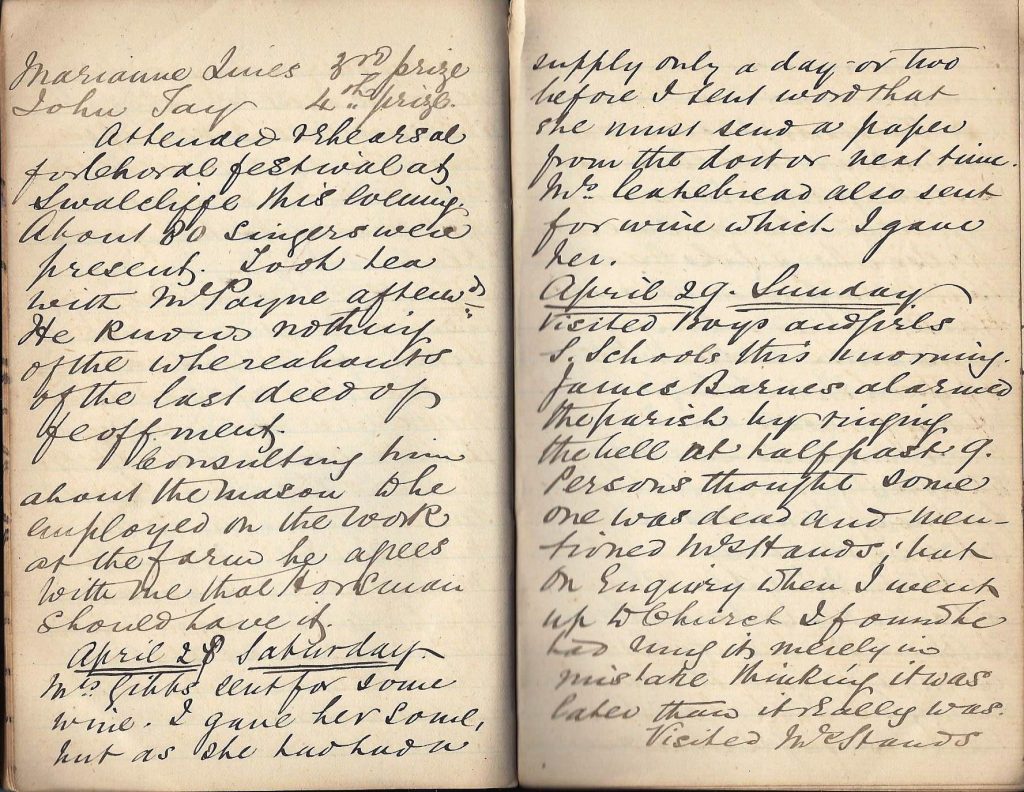 Visited boys and girls Sunday School this morning. James Barnes alarmed the parish by ringing the bell at half past 9. Persons thought someone was dead and mentioned Mrs Hands, but on enquiry when I went up to church I found he had rung it merely in mistake thinking it was later than it really was.

Visited Mrs Hands who remains in much the same condition except that the young woman Hone keeps her cleaner and the place tidier than used to be the case.

Visited Widow Cakebread who is up and about again. I had a long conversation with Mrs Gaydon, her daughter who was with her, and whose husband has taken the little farm at the Cross formerly  tenanted by Widow Tennant.

Visited Mrs Gibbs who is better and was downstairs. She said Roman Catholics did not pray to the Virgin Mary, but I showed her the Litany of the Virgin in one of her books which very much astonished her. She said she did not believe we ought to pray to the Virgin Mary. She spoke about the Athanasian Creed and said that if God refused to save any who did not believe it as representing the Catholic Faith, he was a very unjust God. I told her that those who were not sufficiently educated to understand all the hard words in it, could not be expected to believe it, but that the Apostles’ Creed, the Lord’s Prayer and the Ten Commandments were considered sufficient by our church as might be seen by referring to the Baptismal Services, the Apostles’ Creed (with the exception of the Doctrine of Redemption) containing all that was considered absolutely necessary. I told her that I believed the Athanasian Creed, not because it was said to be written by Athanasius (who, she thought, lived in the reign of Henry VIII and was expelled from the country for writing of it) but because I thought it was founded on Holy Scripture, but that I did not reverence it so highly as the Apostles’ Creed and the Nicene Creed.

She gave me a book “Archbishop Leighton’s Works”. I did not speak to her about baptism.

Visited Henry Sabin and his wife. Both appear to be getting on nicely.

Visited Mrs Mawle who said she had been to see Mrs Gibbs a few days before. She had spoken about being baptized, refused to send for the R C priest, but would like me to baptize her. At the same time she would not promise to come to church. She told Mrs Mawle that she believed firmly in “transubstantiation”.

Attended choir practice this evening. Only two men were there, viz Mr Elley and J Kay.

Mr Fox returned the Fire policy belonging to the Church endorsed to the effect that we might keep a supply of two gallons of oil.