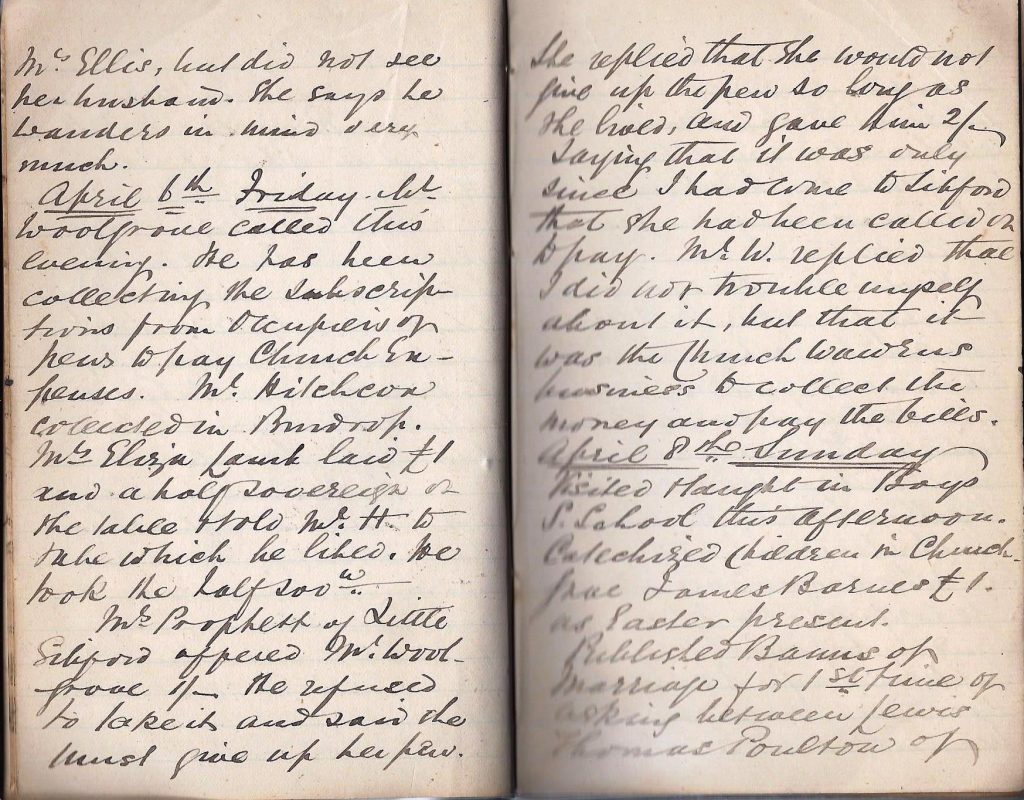 Published Banns of Marriage for first time of asking between Lewis Thomas Poulton of Sibford Gower and Mary Page of Cropredy.

Visited Widow Manning. Told her she might send her girl Ada to Mrs Austin to be measured for a pair of boots.

Visited Fred Horsman and his wife, also Mrs Wyatt and her other daughter who was confined of a girl the same day as her sister. Mrs Wyatt asked me whether I could baptize the child of her daughter who lives in London, but who came to her mother to be confined, on some Sunday before the regular baptism day. I said I could not well do that because it would be breaking through a very useful rule.

Visited Robert Austin and his mother. The former asked me whether the parish clerk had any legal right to call upon the parishioners for Easter dues, adding that he had had high words with him during the week about it. I replied that he had and that the Vicar had too, but that my predecessors having never collected them, I was loth to begin. I added that the clerk was very poorly paid for his services and that as he was practically at the call of every parishioner, a few pence a year from each ought not to be considered a hardship.

Visited old Thomas Sabin but he appeared to be out.

Visited Mr Herbert who was not at home. I had some conversation with his niece.

Conversed with Widow Hunt. Visited Widow Harris of Burdrop. She seemed ill. I gave her 2/6.

Visited Mrs Gibbs. She has always called herself a Roman Catholic but now tells me she has never been baptized. She wishes me to baptize her. Had some talk also with her husband who though he never attends a place of worship has a great deal of ignorant “religious” talk about him.

Widow Robinson has removed from Sibford Ferris to the cottage lately occupied by Joseph Hunt.

Visited Widow Cakebread. She had her eldest daughter with her whose husband has taken the little farm till recently occupied by Mrs Tennant. Their name is Geydon.

Visited the Misses Dix. It appears that Hannah Hone, daughter of Thomas and Ellen Hone, stole a watch last week at Wroxton and is said to have left it with the Misses Cooke in pledge for 5½d. I called at Miss Cookes’ to ask them as to the truth of the matter, but neither of them was at home. The Cookes are said to have given up the watch as soon as the owner came to them for it.