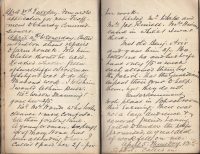 Called on Poulton about repairs to farmhouse, etc. Told him slates should be used. He asked whether  Green of Swalcliffe or ?Storsman? of Sibford was to do the masons’ work. I told him I would let him know.

Visited Widow Manning and gave her 2/6.

Visited Mrs Hands who looks cleaner and more comfortable than for a long time. A young woman, daughter of Mary Hone, has been attending to her. I called and paid her 2/- for her work.

Visited Mr Whale and Mrs ?James? Rimell. Mrs Hiorns came in whilst I was there.

Met old Benjamin Aris and gave him 2/-. He tells me he and his wife have only 1/6 a week each allowed them by the parish. That the Guardians expect their sons to keep them, but they do not.

Entertainment took place in schoolroom this morning. There was not a large audience and several friends having failed to render the help promised, a great deal of work fell on me.