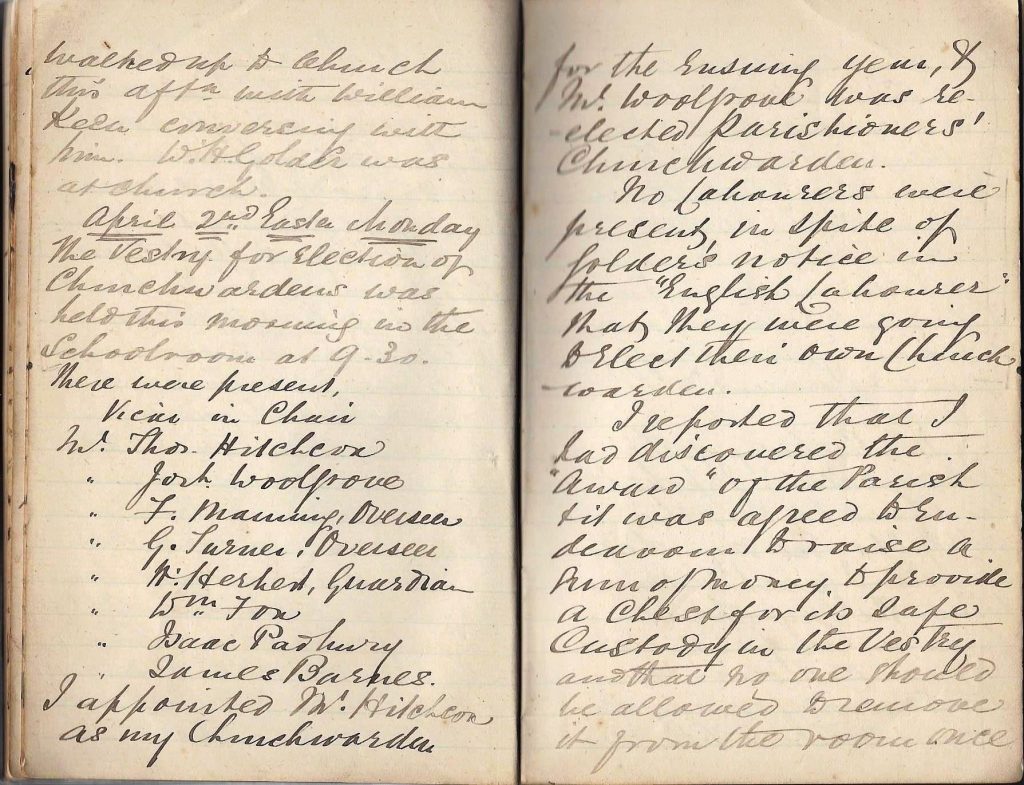 The Vestry for election of churchwardens was held this morning in the schoolroom at 9.30. There were present

I appointed Mr Hitchcox as my churchwarden for the ensuing year, and Mr Woolgrove was re-elected parishioners’ churchwarden.

No Labourers were present, in spite of Golder’s notice in the “English Labourer” that they were going to elect their own churchwarden.

I reported that I had discovered the “Award” of the parish and it was agreed to endeavour to raise a sum of money to provide a chest for its safe custody in the vestry and that no one should be allowed to remove it from the room once it is deposited there. Also that persons wishing to see it should do so in the presence of the Clerk who should be paid by such persons for his time.

Filled up form for Charity Commissioners concerning new feoffment and forwarded it to London.

Mrs Padbury of the Colony called. I spoke to her about her mother Mrs Gibbs. She says she is very ill. I gave her some wine. She says she is firm in her faith as a Roman Catholic.Her son Edward, formerly servant to Rev W S Miller when he was here, now coachman to a family named Waterhouse (Friends) residing near Liverpool, is here for a week or two. He is a churchman having been baptized at home by Mr Morrell when he was Curate here, being ill with croup. Old Gibbs was a quaker but has given up all attendance at any place of worship for years, says he is too nervous to go.

Mrs Padbury asks permission for her husband to cut the overhanging boughs from the larch trees along by his two acre allotment at the heath.