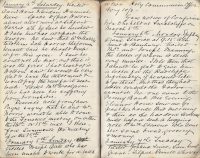 Spoke to Charles Holtom about allotment at Sibford Ferris which he said he wished to take but has not paid the rent for. He said that William Harris told him Job Harris the former tenant said he should keep it for this year. I said he could not do that, and that it was the first I had heard of it. Holtom said he would be very glad to have the allotment and would pay the rent for it next week.

Visited Mrs Woolgrove who has been and is suffering from bronchitis.

Received note from Canon Payne saying that he and Mr Norris would be able to come to the Trustees’ meeting on either the 14th or 15th inst. I therefore summoned the meeting for the 15th.