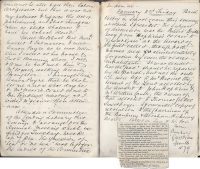 Parish Vestry in School room this evening at which I presided. The subject of discussion was the Public Bridleway from “Hopkins’s Corner” to “Great Gate” as the Award of the field calls it, though both names were almost entirely forgotten by even the oldest inhabitants. It was decided that the “pad” should be repaired by the parish, but not the ruts which were left to Mr Hiorns the tenant of the land allotted by the Award to John Hopkins and Mr Arthur Lamb, the owner of that allotted to Thomas Gilkes Sweetbryer. I forwarded copy of resolution to the Chairman of the Banbury and Bloxham Highway Board.

Called on Jay and W Fox.

THE REPAIR OF A BRIDLEWAY AT SIBFORD GOWER.

The CLERK read a letter from the Rev. E. T. Stevens, of Sibford, stating that at the vestry meeting it had been resolved that the “pad” of a bridle way there should be repaired, but not the ruts.

The CLERK said that by Act of Parliament they were bound to keep a bridle way eight feet wide.

The CHAIRMAN asked if it would be very expensive to repair the whole of the road, and

The SURVEYOR said it would cost a good deal.

Mr. HIORNS said the parish had always repaired the road. It was a field road leading to his farm and the farm next to his.

The SURVEYOR said the road had not been repaired since the Board had been formed.

Mr. HIORNS—It is in a very bad state of repair.

The CHAIRMAN said the Board generally agreed to pay out the money for any purpose if a parish meeting agreed to it.

Mr. GOLBY thought it would be a very cheap way of getting out of the difficulty.

It was agreed that the “pad” be repaired.