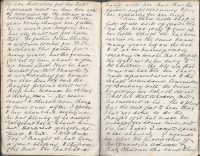 There was a heavy fall of snow last night, although it was very mild during the day.

Buried Mr Joseph Pettipher’s remains. Mr Richard Lamb, Mr R Routh and many other quakers attended the funeral as well as a number of other persons, some of whom, as Ezra Green’s wife and Mrs Bond’s daughter, cannot get out to Church on Sundays even when the weather is fine.

Ann Fox called and asked for a letter for the Horton Infirmary for Ada Bull whose feet are bad. I afterwards called on Ann Fox with the letter filled up. She told me she had had the child two or three years and only charged her father 2s a week for keeping her – but she could not get even that. The father John Bull, a widower, worked for Thomas Hitchcox and his father for many years, but the former got rid of him about a year ago since which time he has worked for Mrs Mawle and is now working for some one else. Ann Fox said she thought persons would not keep him because he is such a “dirty man”. He never comes to church now, though he came once after I spoke to him about his negligence. He has plenty of so called “religious” talk about him – but there his religion appears to end. I told Ann Fox I thought it had been a great blessing to the poor girl that she had had a home with her – but that the father ought certainly to pay her regularly for her keep.

Ann whose little shop is full of all sorts of goods told me she was going to give up her little school which had been carried on in the same house many years before she took to it as her business was increasing so much that she felt she could not do her duty to the children. She told me that some one had told her I had made representations to the School Attendance Committee of Banbury with the view of getting her school closed. I told her that whoever said that uttered a lie. She replied that she was glad to hear that I had not done so as the thought of it had made her unhappy for some time and she had hoped I would speak to her about it. I informed her what the provisions of the Education Act were that children who came to her would not be able to get their labour certificates, but that it was not my business to enforce the Act of parliament and I had therefore taken no steps whatever to have her school closed.

Visited the School this morning. Walked to Tadmarton to meet Canon Payne as he was not in when I called at his house and Frederick Manning, whom I met, told me he had met him and Mr Wyatt walking towards Broughton. I arranged with Canon Payne that he should let me know what day he and Mr Norris could come to the Trustees’ meeting as I wished to secure their attendance.

Attended a Committee of the Lending Library this evening to arrange for the Annual Meeting which we fixed for Tuesday week at 7pm. The question of “tea” or “no tea” was left for the ladies of the Committee to decide.