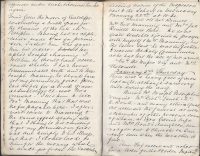 Coles’s Baby buried this afternoon. No one at the funeral except Anna Young the nurse. I told her to tell Coles it was usual for parents to attend the funeral of a child. Charles Barnes told me such an instance of negligence occurred in Mr Bourchier’s time and he said he would never officiate under such circumstances again.

Found Green the Mason of Swalcliffe constructing a brick grave for the remains of the late Mr Pettipher. Having had no application made to me for permission, I asked him who gave him his orders – he replied Joseph Manning. I told him he should have ascertained whether I had been communicated with and to tell Joseph Manning he should have got my permission first. Green said the fee for a brick grave at Swalcliffe Church was two guineas. I told him to tell Joshua Manning that that was the fee payable here. I afterwards wrote to Manning to the same effect stating also that I thought his omitting to get my permission first was due simply to his illness but that I should look to him for the money which he must get from the executors.

Received notice of the Inspector’s visit to the School on Wednesday January 22nd at 10.30.

Visited old Mr Rimell – Mrs Fred Manning and Mrs James Rimell were there. He was quite sensible and joined in prayer with myself and Mrs Manning, but the latter said he was too feeble to receive the Holy Communion as he has lost the use of his arms.