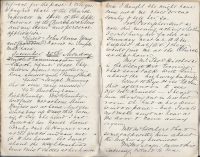 Visited Buckingham, Richard Scruby. Edward Scruby. Widow Lines not at home. Ann Haynes not at home but she sent a boy up this evening to say she heard I had called at her house. Dorcas Scruby said A Haynes was at Eli Webb’s and saw me go to her house. As I was about the neighbourhood some time I called at her house twice I thought she might have come out to me and told Dorcas Scruby to tell her so.

Joshua Pettipher sent a note this evening asking whether I could bury his father on Thursday next at 11am. I replied that (DV) they would find me at the Church at that hour.

Met Mr Thomas Hitchcox in the village this evening and had some talk with him about the highway business.

Went to Rye Hill Farm this afternoon to see old Mr Rimell. I heard him shouting out in his bedroom which had a broken window pane – but I could not make anyone hear at the door and came away again.

Met Mr Heskerl and had some talk with him about the highway business.

Mr Montagu called this evening and staid to tea.

Thomas Aris, of Stock’s Yard, late of Traitors’ Ford called and asked for help, his wife at home crying. They wanted bread, as he has been out of work two or three weeks and could get nothing to do. People would not give him credit even for a loaf of bread as they thought he would be going away. I gave him a shilling and a parcel of grocery. In the evening he called again and asked me to give him a few lines of recommendation. He brought one from Mr Timms of Hook Norton Lea for whom he had been working, as Carter for three years. I gave him a few lines stating that he had lived at Mr Timms’s as stated and that I had no reason to doubt his being an honest and respectable man. I told him I wished I could say he was a good churchman, but both he and his brother Joshua had been very negligent of their religious duties. He was for 7 or 8 years a policeman in London, but his health failed and he resigned in consequence. He would like to get into the County Constabulary if possible.