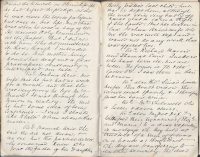 Mr Stephen Hand called this morning and paid his rent. Said he had offer of a farm of 120 acres, but would rather stay at the Heath. Would write or come and ask Trustees to withdraw notice.

Visited Thomas Wilks. His daughter Mary has had several violent fits lately. I talked for some time with her and her son Frank – and asked the latter why he had left the Church in which he had been baptized and joined the Methodists. he replied that at first he used to go to Church in morning or afternoon and to the Methodist Chapel in the evening and that in time he came to like the Chapel better than the Church because he felt there as he never did in Church, that he felt “nearer to God there” but that he had never harboured any feeling of unkindness toward the Church or Church people. He had signed the pledge, although he was never the worse for liquor but once in his life, and tat was when he was a boy of 14. He received Holy Communion at the Chapel. But I did not ask him who administered it there, though I intended to do so. His mother, being somewhat deaf and a great prate-apace constantly interrupted our talk.

Visited Joshua Aris. His wife said he had had no work for a month – and that she was very sorry he left Mrs Mawle. It was through the Union in reality. She said he had some idea of being confirmed. I said I should like to talk to him about that matter.

Visited Hannah Aris. She said she did not know, and no one but the parties directly concerned knew who was the father of her daughter Betty Wilks’s last child, but that he kept them, although she was still very badly off and was glad to earn a trifle if she could. But her sister-in-law Joshua Aris’s wife told me she was well kept and would not do amy work that was offered her.

Visited Richard Harris and Thomas ??Sims?? Quakers who have been ill, but are better. The former is 72 and the latter 86. I saw them in their bedroom.

Visited also Thomas Sims’s? housekeeper ??Eber Bond’s widow. She seemed weak and poorly and I therefore gave her some wine.

Visited Mrs Shelswell who is better and downstairs.

Visited also Misses Dix and witnessed their signatures (Elizabeth and Maria) to a deed respecting a mortgage which they hold as trustees of a sum of £1000 on a house at Brighton which they are transferring to another security. The deed was an “Escrow” (a deed given to C by A when B has fulfilled his contract with A).

Ezra Green’s wife came and begged some old linen ??? for her children who have running sores on their legs. Mrs S gave her some and some cough mixture for them.

George Poulton who has just completed his two years’ training at St Mark’s College called this morning and asked me to lend him the “School Guardian” for today, as he has not yet got a situation. But my copy had not arrived.

Mrs Hiorns called and asked me to write notices for a Vestry meeting in School room on Friday evening next, on business relating to bridle road from Hopkins’s Corner to Great Gate – which I did.