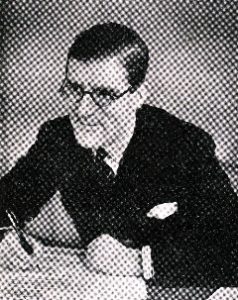 Born in St Albans, Hertfordshire in 1906 Leslie Baily started his long association with Sibford when, in 1918, he arrived as a pupil at Sibford School travelling from his home on the Isle of Man where he lived with his family. His father was working for Quaker Friends at the internment camp on the Island and the journey to Sibford School took him two full days. Whilst at Sibford School he was a contemporary of Godfrey Basely who created the long running radio series, The Archers.

Leaving Sibford in 1921 Leslie Baily completed his senior education at Cheltenham Grammar School. He started work in Bristol Docks in the wholesale market where, after selling bananas at too low a price, he was sacked by an irate merchant and decided that he was not cut out for a career in commerce. He earned the rest of his living by his pen.

He started his journalistic career joining the Yorkshire Evening News as a Junior Reporter where he became motoring correspondent, special correspondent (which took him all over the North of England) and wireless correspondent. During this time, he married his wife, Margaret Jasper and then promptly resigned his job to become freelance. He successfully extended his writing and joined the BBC in 1924 and was responsible for a succession of features, plays, adaptations and revues, first in the Leeds and Manchester studios of the BBC, and then in London.

He went on to produce a series of Scrapbooks which began as a BBC North Regional broadcast which was first broadcast in 1932. He later described it as “merely a selection of rather unusual items of music, drama and curious information, presented in a rapid panorama. There was no theme or period.” After the fourth Scrapbook, in March 1933, the programme was given wider coverage and broadcast on the national network of the BBC.

From 1936, Leslie Baily and his co-producer Charles Brewer, broadcast StarGazing, which alternated with the Scrapbooks; in each of these programmes, a popular stage or screen star reminisced about his or her career.

Maureen Hicks
…. To be continued