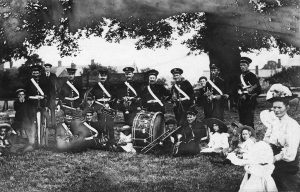 Rev. Edward T Stevens, vicar of Holy Trinity, (1874 -1898) encouraged all his parishioners to ‘Take the Pledge’ and abstain from all forms of alcohol. He believed strongly that alcohol was a powerful influence on the behaviour of villagers and  frequentl y preached about the evils of alcohol. Once he had organised the formaMon of the Sibford Brass Band in 1884 he drew up a series of rules for the formation of a Temperance Band. Members of this separate band were often the same as those who played with the main Brass Band but they met and practised separately. The Temperance Band met in the Mission Room and paid subscriptions so that the band remained separate from the main Brass Band. 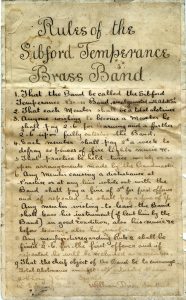 Rev Stevens drew up a series of Rules for the Temperance Band requiring the members to be ‘total abstainers’. If any member broke this Rule, he was fined half a crown and, if he offended again, was dismissed from the band. In addition to the weekly subscription of two shillings and sixpence a further tuppence a week was charged to defray the costs of the fire-lights and music. If any band member caused a disturbance at practise or when out with the band, he had to pay a fine of three pence for the first offence and one shilling for any further offence. I imagine these exacting rules may well have caused some difficulties for those who also played with the main Brass Band who often entertained at social occasions!