Mrs Isabella Hannah Stevens, ‘Bell’, was the wife of Rev Edward Stevens, who was vicar at Holy Trinity Sibford from 1874 – 1898. Her husband wrote detailed diaries recording life in the Sibfords during his tenure and are available to read on the Sibford website. They had four children, Isabella Rosa, Harry, William (who died in infancy) and Frank. Their youngest son, Frank was a dreamer, writer, traveller, musician, sculptor, painter and lover of peace. While his mother lived and looked after her family in the Rectory (now The Old Rectory by the pond in Sibford Gower), Frank, after attending Sibford School, studied at Keble College, Oxford and moved to London to act in drama productions. He mixed in theatrical, philanthropic and royal circles and was appointed Pageant Master to Queen Victoria.

His Pageants were performed all over the world and attracted large crowds of people both taking part and as spectators. He took on a flamboyant persona and when not conducting one of his dazzling pageants with casts of thousands, he loved to come to his home in Sibford Gower where, as ‘Lord of the Manor’ he enjoyed a lavish lifestyle entertaining his extravagant London friends. He was a familiar sight in the villages holding the reigns and driving his carriage pulled by his matched, white Arab ponies. He loved his garden and enjoyed painting 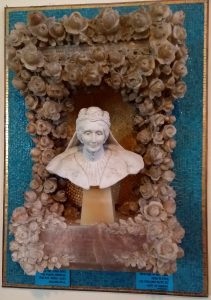 and sculpture in his studio. When his mother Isabella died, he sculpted a memorial to her which is on the east wall, to the right of the altar in Holy Trinity Church. He lovingly chiselled the face of an elderly lady of tender grace looking out from a bower of roses on a mosaic background. Verses written by Tennyson feature below the sculpture. His skill as a sculptor were recognised by dignitaries of the day and other commissions included The Prince of Wales, The Duke of Connaught, Earl Grey and the Aga Khan.

Rev. Edward Stevens and his wife Isabella are both buried in a grave just outside the door at Holy Trinity Church and a bronze angel, sculpted by their son Frank in 1928, sits at the foot of the grave as a lasting memorial to his parents. Following his death in Brighton in 1934 Frank’s ashes were interred in his parent’s grave here in Sibford.