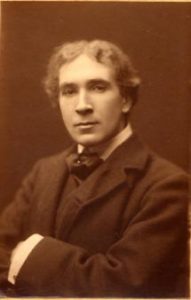 Following the piece last [next?] month about the plaque sculpted by Frank Lascelles in memory of his mother, Isabella Stevens, some readers might like to know a little more about our famous villager.

Lascelles, as Pageant Master to Queen Victoria, became known as the ‘Man who staged the Empire’. His artistry inspired both participants and audiences at all his Pageants. They were held in different parts of the Empire including India, South Africa and Canada as well as many major cities in England. He overcame great difficulties to create harmony between different races and creeds. His work inspired greatness, loyalty and patriotism in those who came to take part or to watch. He was the master of colour and movement and a marvellous manager of great crowds. Thousands of local people took part in his pageants. He used nature and space as his stage enabling thousands throughout the Empire to see the colour and beauty of their heritage.

In 1924 the British Empire Pageant was staged at Wembley as part of the the Festival of Empire. It had a cast of 15,000 people, 300 horses, 500 donkeys, 730 camels, 72 monkeys, 1000 doves, seven elephants, three bears and one macaw. It took three days to see the whole performance. There was an orchestra of over a hundred musicians selected from three London orchestras. The large choir was selected from local choral societies, who gave their services free.

Margaret Baxter, who was Mistress of the Robes for the Australian Scenes wrote this about Frank Lascelles, ‘His skilful and magical handling and blending chaotic crowds of men, women and children of every race and clan and creed, who responded to his extraordinary vital personality in a way that is indescribable.’

He was a man of unique and varied gifts. An old friend of many years, Sir George Frampton, said of him ‘Lascelles should have been the greatest sculptor of his day.’ Some of his subjects included The Prince of Wales, the Duke of Connaught, Earl Grey and the Aga Khan. Painters have said he might also have been one of the greatest painters of his time. Sir Herbert Tree said that the country had stolen Frank Lascelles from the theatrical profession where he would have worn the mantle of Betterton, Garrick, and Irving1.

In spite of the acclamation and affection of thousands of various classes and race, Frank Lascelles remained a true artist. His passions were those of an artist, his soul’s home was in the atmosphere to be found in Florence. In the tower of his home in the Manor, Sibford Gower, overlooking distant hills or among the scent of roses in his flower garden he reached the atmosphere of his beloved medieval Italy.

Although his courteous, overwhelming enthusiasm affected thousands, each Pageant was just a passing show and his theatrical work has not lasted through the ages. The Millennium Pageant performed in the Sibfords by the villagers in 2000, focussed our thoughts on our rich, rural heritage and all those who took part in any way hoped that the greatest Pageant Master of all time would have enjoyed our tribute to him.

1 Thomas Patrick Betterton, 1635-1710, was a leading male actor and theatre manager in Restoration England. David Garrick was an English actor, playwright, theatre manager and producer throughout the 18th century. Sir Henry Irving, 1835-1905, was a Victorian stage actor and manager who supervised sets, lighting, direction and casting as well as playing leading roles.

Read more about Frank Lascelles in the People section. There are also numerous references to his childhood in his father’s diaries.