Sibford School marked Armistice Day 2014 with the opening of a new Peace Garden.

Pupils at the Quaker School, in the Ferris, created the garden in recognition of the 100th anniversary of the start of World War 1 and also as a tribute to former student, Conrad Lewis, who was killed in Afghanistan on 9 February 2011.

Returning to the school to perform the official opening were Conrad’s parents, Tony and Sandi Lewis. A commitment to peace lies at the heart of Quaker belief. Quakers think of peace as an approach to living in the world and working for social change, rather than simply an ideological opposition to war and to violence. The Peace Garden, which will be a place where pupils, staff and visitors to the school will be able to go for quiet reflection, therefore seemed a fitting tribute to Conrad.

We couldn’t be more humbled, pleased and delighted to be here today,” said Tony Lewis. “What has been produced is absolutely appropriate for the school, really appropriate for Conrad and beautitiful for us. I think it is a stunning memorial to Conrad and to peace and we will certainly be back with Conrad’s brother and sister and other friends and family over the months and years to come.”

In addition, inspired by the Blood Swept Lands And Seas 0f Red installation at the Tower of London, Junior School pupils created a number of glazed clay red and white poppies that were ‘planted’ in the garden especially for the opening.

The Armistice Day ceremony, which was attended by more than 400 people, included readings by pupils, staff and parents and, following a silence at 11am, concluded with the playing of Abide With Me by 15-year-old pupil George Johnson-Briscoe on trumpet.

Tony Lewis said: “It is areal honour to open this Peace Garden. Conrad would be surprised, humbled and absolutely delighted to be remembered in any way at Sibford School but certainly in this way. He loved being here, although I think it would be fair to say that the teachers probably found him a little challenging and boisterous … he certainly lived up to the school phrase of‘ living adventurously!” 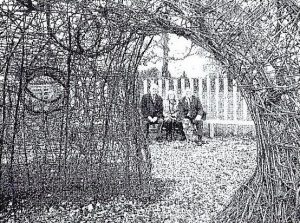 Pictured: Sibford head Michael Goodwin with Sandi and Tony Lewis seated on the Conrad Lewis memorial bench. Also pictured is Peg, a stray dog that made friends with Conrad in the Quadrant compound when he arrived and was rescued and flown back to the UK after his death.