In this 100th anniversary year of the outbreak of the First World War the nation prepares to honour and remember all those who died in action, or from wounds received; whilst serving in the armed forces during The Great War. 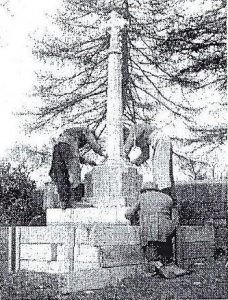 The War Memorial in Holy Trinity churchyard will be at the centre of the Service of Remembrance whilst the names of those men who served and did not return to their village are read out. Nine names are inscribed on the memorial and one is interred in the churchyard marked by a War Graves Commission headstone. While the community lost ten of its own those who also served and returned to their loved ones are remembered on a plaque which hangs in the rear of the church. We are indebted to Eva Herbert (née Lamb) who kept notes during those four war-torn years so that we have a record of all those from our community who served their country. 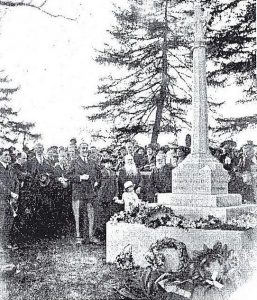 At the end of hostilities a Sibford War Memorial Fund was- set up which resulted in the construction of the memorial we can see today. It was built by local men working for Poulton Builders and was officially unveiled by Sir Rhys Williams on Sunday 1 May, 1921. Sir Rhys Williams was the MP for Banbury at that time and the event was recorded in the Deddington Deanery Magazine in June 1921.

WAR MEMORIAL.—The event of this month has been the unveiling of our War Memorial by Sir Rhys Williams on Sunday, May 1st. We were favoured with a glorious evening and there must have been 400 people present. The service was arranged to be truly representative of the village. The lesson was read by Mr. J. Alcock, and Mr.Reason spoke on behalf of the Friends. The Memorial is a very beautiful cross standing ten feet high in the best position in the churchyard, and it is visible to all passers along the main road. There are nine Sibford men commemorated, the words on the front of the step being :—”In memory of the men of this parish, who fell in teh great war, 1919-1919.”