Sibford Village Hall was transformed into a centre for the celebration of Tibetan culture on Sunday 14th and Monday 15th September. Eight monks from the Tashi Lhunpo Monastery, together with Jane Rasch, the tireless organiser of their tours in the UK and further afield, provided to a packed hall a spectacular performance of their sacred chants and dances, preceded by a workshop during which participants learned some of the dance steps and hand gestures, and were invited to blow the long horns, which make a deafening trumpeting sound. There were workshops, too, for the children from Sibford’s two schools, where they learned a few words of the Tibetan language, and how to print prayer flags and make mandalas and special ‘necklaces’ which were blessed. The children were completely engrossed by it all. 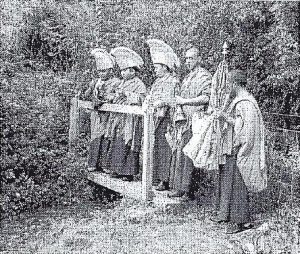 The monks also, astoundingly, managed to create in less than a full day, a beautiful sand mandala, which was broken up during the ‘destruction ceremony’, and the central grains, representing the deities, were taken to the River Sib and disposed of in the water, so that their blessings could be spread as widely as possible.

I would like to thank not only the monks and Jane for coming to our village, but also all the people who helped to make the event possible, by accommodating the monks in their homes and working so hard during the two days.

Generous funds were raised for the Tashi Lhunpo Monastery and the Tibet Society.