Reading rooms were originally provided for the working classes by the upper classes, mainly the church and local landowners. Their establishment reflected contemporary attitudes to philanthropy, recreation and self-help and confirmed the great class divide. They were developed in rural villages across the UK from the mid 19th to mid 20th century. Reading rooms offered an alternative to the public house for the working classes, although they tended to appeal more to the lower middle classes, and membership was mostly restricted to males.

A Cutting from Banbury Guardian, 18 January 1894 stated that-

“On Wednesday evening of last week a company of over 30 members and friends of the recently-established Reading Room sat down to substantial old English dinner, Mr. R B Oddie sketched the short history of the reading room, according the lion’s share of the credit of its existence to the kindly feeling and public spirit of Mr. Henry T. Dixon. He said “that comfortable room where the young men of the district could meet for improvement and recreation had long been a great want, and that the appreciation in which the provision of such a room was held was highly encouraging. He hoped the Sibford Reading Room would continue to prosper, and that it would be a means of good to all connected with it.” 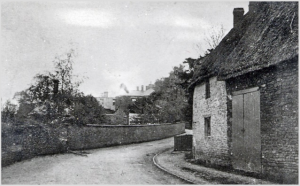 The Reading Room – sometimes known as Dixon’s Room, was in the group of old stone buildings between Anne’s Cott and Rymell’s Corner, in Sibford Ferris, where the Main Street takes a sharp left hand bend onto Hook Norton Road. The old wooden doors of the stone barn were the entrance to the Reading Room which had been used to store Josiah Woolgrove’s cart.

In March 1894, in his diary, Rev Edward Stevens refers to slips of the ‘Sibford Chronicle’ being hung up in the Reading Room for villagers to read the village gossip – something which Stevens rebukes and requests that Dixon ‘desists’ from displaying them. No freedom of the press enjoyed by our Sibford Scene today. 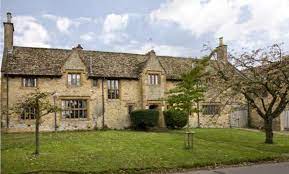 Home Close on Main Street, designed in the Art and Crafts style by architect Baillie Scott in 1911, was built on the site of farmer Richard Austin’s Barn. Mr and Mrs Hiles who lived in Home Close also owned the building which housed the Reading Room.

Senior villagers can remember their fathers meeting to socialise and enjoy a game of billiards there. After her husband’s death, Mrs Hiles sold off some of the buildings that they owned, including the Reading Room.

The Reading Room which had served the Ferris villagers so well was also used to house an evacuee family who lived there temporarily in the 1940’s until they moved to a house in North Newington. During WW2 The Home Guard met there and it is reported that once they were issued with 303 Rifles one of the guns was discharged leaving a bullet in one of the upstairs walls!

Later, it became a shop and residence for Jack and Esme Simms. Jack was a trained electrician in the RAF and once he returned home to Sibford after the War, worked at the hospital and opened an electrical shop and workshop where he repaired electrical items and bicycles.

The Woman’s Institute and Woman’s Bright Hour are known to have met there. Eventually the run of stone buildings was demolished and redeveloped by a local builder, David Messenger, into the single dwelling now known as Westerways.

In the twentieth century, as other diversions appeared and the countryside became more democratised, reading rooms gradually declined. They were an important part of village life and have left interesting evidence of former lifestyles and attitude.