Some memories from Terry Comm.

I started school at the Gower in September 1939. There were two classrooms separated by a heavy sliding door and a smaller room where Tilly Tarver was the infants’ teacher. Her room had a well-guarded open fire which was used in the winter to thaw out the crate of third of a pint milk bottles into which the milk was frozen so that it pushed the cardboard top an inch above the bottle. There was a large brown cupboard in which were kept teaching aids and other treasures. On the other side of the fireplace was a large rocking horse on which good children were rewarded with a ride. I can’t remember ever being allowed on it! The senior room, where Mr Chard was teacher, with his liberal use of a ruler to rap you over the knuckles, which was his method of teaching maths. I can’t remember much about the room, but can remember his treatment of my knuckles.

Outside, there was a small tarmac play area, a little field, which had a stool ball pitch on it and behind the school, a steep bank with grass, trees and bushes under which I remember a large snake skin being found. This caused some consternation. In winter, the tarmac was used for an icy slide, which

was very popular with boys and girls. Boys played marbles, whips and tops and football with tennis balls. Girls played hopscotch, skipping, ball games and chanting games such as “Farmer Wants a Wife” into which the boys were dragged.

Walking to and from school we had to carry gas masks; various bags and boxes quickly got worn out so we used large round Grapenut cereal tins and thick rope which lasted a long time. Air raid warnings were given by the policeman riding round both villages on his bicycle, blowing his whistle with a white board hung round his neck with “air raid warning” in red on it and “all clear” in green, when he turned it round. 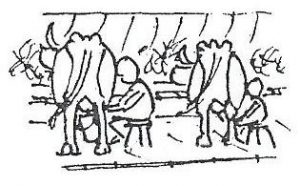 The journey to school often started in Joe Canning’s milking-shed, when his son Mick and I would collect up the twelve cows, walk them round the track into the road to the top of Mannings Hill where David Dyer would join us and help to take the cows to a field in Burdrop where we left them to be collected after school and returned for evening milking. So that Mick could play cricket, 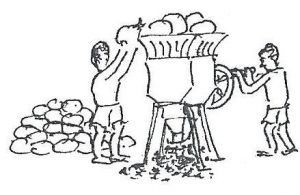 I often helped him do his jobs chopping mangolds, chaff cutting and loading the stalls with hay and cow cake. In those days Joe sat on a three-legged stool milking with his head against the cow, singing songs such as “Linden Lee” and “The Kerry Dancers”. The milk would be poured from the bucket into the cooler and run down into a churn which was loaded into his three wheeled Raleigh van from which he delivered it to the door and ladled it out into jugs and bowls. 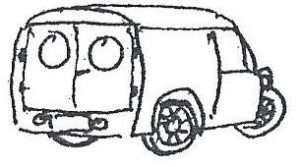