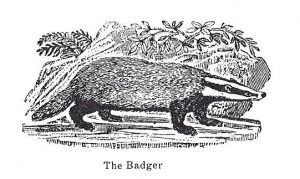 . This dry spell is making life hard for the birds and mammals that rely on worms and slugs as their main source of food. I have heard of two places where badgers were thought to be taking ducks because the force used to break into the pen was beyond a fox’s capability. In one case the ducks made nests away from their usual pen and were sitting on eggs, so rather than disturb them a barricade was put round the nest to keep foxes away, but they were still taken. Last night at about ten o’clock they heard a noise and went out to see a badger trying to get at another sitting duck. It was very determined and was not going to give up easily. It took a bang on the nose with the torch to persuade it to move away. with the big increase in the badger population I expect we shall see more poultry taken by them during dry spells of weather in the future.

May 12th. I was told today about a muntjac that found itself trapped when it jumped down into a back garden and found the walls too high for the return journey. It had to be let out through the house.

May 14th. I saw my first swift of the year today. Their decline in numbers in recent years is probably due to the lack of good nesting sites. They are among the least adaptable birds in that respect. I cannot recall a nest anywhere other than under the eaves of a building and modern farm buildings leave few places for them to get in. I wonder whether a nest box with the entrance through the bottom, fixed under the eaves of a two or three storey house might attract them. Years ago there was plenty of poor thatch around which provided well insulated nesting sites.

May 17th. A good rain at last! Nearly an inch has fallen over the last two days which is more than we have had over the last six weeks.