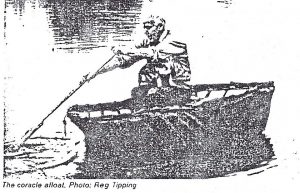 Bill Crabtree, the Reserve Manager of Harry Williams’ /  Lamb’s Pool suggested to Bloxham WATCH Group Conservation Volunteers that it might be fun to build a coracle. We warmed to the challenge .

Bill collected ash, hazel and goat willow. We fashioned nine 9ft and ten 7ft laths by splitting ash using the metal bars in Bill’s pigsty and a cleaving break. We had to look sharp because the pigs were in residence and delighted in gnawing the ends of the poles.

The flimsy basketwork frame was pegged to the barn floor. We poured boiling water on the laths to make them pliable and bent the ends upwards to form the sides. The board seat was fitted to the sides. All loose ends and the seat was secured by a twisted gunwale of ash, willow and hazel. After trimming, the framework was covered with calico and given several coats of bitumastic paint. The craft was successfully launched and to our surprise was stable, with little draught and easily manoeuvrable with the single paddle. No champagne was available but we were rewarded with a glass of Bill’s elderberry wine.