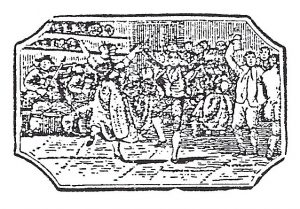 For the benefit of any exiles who receive the Scene in far outposts by runner with cleft stick, it should be explained that we mean the 27th and 28th June whose events will be long remembered.

First off was the Fayre on Saturday afternoon. The well-filled stalls, al fresco in the hot sunshine, were thronged by customers who also enjoyed wellie-whanging and bale-tossing, real trials of strength. Welcome refreshments were served in the whispering shade of the Hall. Many children had entered enthusiastically into the decoration of paper plates to represent seasons.

Saturday evening brought the Shindig at Temple Mill including the Pig Roast and 60s dance, where excellent facilities had kindly been provided by Edwina and Bill Sabin. A merry throng made its way to Temple Mill, where the Scouts efficiently organised car parking.

First we saw the large porker cooking over a glowing fire attended by the beaming cook in charge. Then we joined the happy crowd enjoying drinks from the mobile bar to the sounds of the 60s belting out from the barn, at first on records and then by a great live band – really jumping. Soon the barn was crowded with dancers doing their manic thing and having a marvellous time.

Meanwhile a line had formed to collect plates of succulent pork and sausages with salads of many kinds. All tickets had been sold and the line just kept coming. There was a lovely happy atmosphere and many people had taken much trouble to dress as hippies, flower children and other sixties characters.

On the Sunday afternoon ten magnificent gardens were open, all different and a joy to behold. The mini-bus and its obliging driver were a great help in getting round.

Later that afternoon we enjoyed a tea dance in the Village Hall to the evocative music of a live band. Despite the warmth, several couples quickstepped, waltzed, foxtrotted, & tangoed with enthusiasm and skill, much refreshed by tea and cakes. When the last waltz was announced at six o’clock there was a concerted sigh of regret.

So ended the festivities of a lovely weekend, all bringing huge enjoyment to the villages and raising over £1800 for the Village Hall. Three hearty cheers for all those who worked so hard to make it such a rip-roaring success. Let’s have another one!