The idea to form a Fire Brigade for the Sibfords was first discussed in 1938 but it did not happen at that time although some money was pledged to a Fire Fighting Fund. In January 1941, following the damage caused by the number of enemy incendiary bombs being dropped, a further public meeting was held and a committee was formed to manage the Sibford Fire Brigade.

Further money was donated to buy or loan the following equipment; 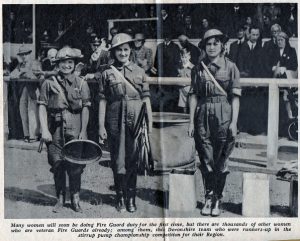 The equipment was to be stored at Holly House, Sibford School with a stirrup pump being kept at the Wykham Arms in the Gower. Villagers were able to supply ladders, hose pipes, long handled rakes, long handled shovels and large hooks.

Four men volunteered to be firemen with a further eight men prepared to train as supplementary helpers.

Banbury Rural District Council confirmed that there were a number of hydrants in both the Gower and Ferris but water pressure was not expected to be high enough to extinguish a fire once it had taken hold. Special couplings and adaptors were needed because the Hydrants installed by BRDC were non standard. Sourcing these was difficult due to shortages of supply and the fact the BRDC refused to pay for them.

Fire parties were formed and training and practises undertaken at Sibford School organised by Mr Roland Herbert. A hole was drilled into the external wall of the Sibford School swimming pool building so that the pool water could be used in the event of a fire at the school or nearby properties.

Owing to shortages in the number of Fire Guards in target areas compulsory Fire Prevention Duty was introduced by the Ministry of Security, for women aged 20-45 years.

Several women volunteered for duty with the Sibford Fire Brigade including Mrs Tarver and Miss Ecroyd.

Together with the Home Guard the Sibfords were well prepared for war!