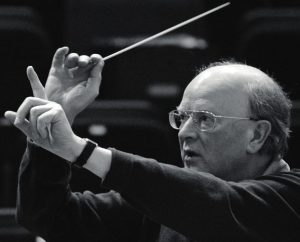 Composer and conductor, Guy Woolfenden OBE, has died aged 78. A resident of Sibford Ferris for more than 40 years, Guy Woolfenden was Head of Music at the Royal Shakespeare Company for 37 years, composing more than 150 scores for the company. Adrian Noble, one of the many directors with whom he worked at Stratford, said: “Guy believed that music should be at the heart of a classical company, as it was for Shakespeare.”

Guy was born in Ipswich, the son of Kathleen and Harold (“Woolfy”), who founded the Cambridge Music Shop in the early 1960s. Educated at Westminster Abbey Choir School, he sang at the wedding of HRH Princess Elizabeth to the Duke of Edinburgh in 1947. From Whitgift School, Croydon, he went on to study music at Christ’s College, Cambridge and Guildhall School of Music and Drama, London.

In 1961, he joined Peter Hall’s newly founded RSC and soon became Head of Music and Resident Composer, writing the scores for Peter Hall’s ground-breaking productions of The Wars of the Roses in 1963. His musical version of The Comedy of Errors, written with Trevor Nunn, won the lvor Novello and Society of West End Theatre Awards for the best British musical in 1976. Other notable productions for which he wrote the music include Hamlet with Kenneth Branagh, and Bill Alexander’s productions of Richard III and The Merchant of Venice, with Antony Sher.

Guy had a wide-ranging career as composer, conductor and festival director outside the RSC, composing and arranging scores for several ballets and conducting many British symphony orchestras. His success with composing wind music led to commissions from all over the world. Among his many original works were Gallimaufry, reworked from the music he wrote for Trevor Nunn’s production of the Henry IV plays for the Barbican’s opening in 1982, French Impressions, inspired by the paintings of Seurat, Bohemian Dances, Illyrian Dances and Divertimento for Band, given its first performance in Killarney in 2007 by Birmingham Symphonic Winds, of whom he was Patron for 20 years. He was conductor of Warwickshire Symphony Orchestra, Liverpool Mozart Players and Birmingham Conservatoire Wind Orchestra, Chair of National Concert Band Festival and the Denne Gilkes Memorial Fund, the first Artistic Director of the Cambridge Festival and a frequent broadcaster on BBC Radio 3.

Guy composed the music and songs for the Sibford Millennium Pageant in 2000, which were recorded by Birmingham Symphonic Winds.