Pupils at Sibford School in the Ferris are creating a new heritage apple orchard. Fifteen trees of different varieties that have originated in Oxfordshire and neighbouring counties have been planted in Holly Tree Field at the edge of the school’s campus.

The seed of the idea came from villager Bill Crabtree who uses the field to graze his sheep. Explains Andy Newbold, Director of Studies at Sibford and a keen Horticulturalist, “Bill noticed that two apple trees in the field had come to the end of their natural life. We talked about replacing them but the idea quickly took root so that in the end, rather than having a couple of new trees, we have created a whole orchard.” 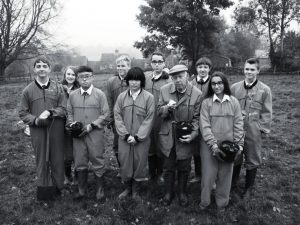 The apple trees have been supplied by Marcus Roberts, founder of the Mid Shires Orchard Group, and have been sponsored by parents and staff together with Bill and his wife, Barbara. They were planted by members of Sibford School’s Year 10 & 11 horticultural class with the help of teacher Angy Bovill, Andy Newbold and members of the school’s grounds staff.

Bill Crabtree also came along to ensure that everything went to plan. He is pictured above with some of the members of the planting team.