What‘s in a name? A question often asked and one which can produce some interesting answers, especially where local sign-posts are concerned.

Where the place name Sibford originated is somewhat of a mystery, but one theory is that it derived from ‘sheep ford’, there being a ford dividing the Ferris and the Gower. In a document of 1153.the name Sibba’s Ford has been detected, and for many years it was spelled ‘Zibberd’.

Soon after 1066 King William rewarded gifts of land to many of his loyal knights. One of them was Henry de FERRIERERS who owned 1,000 acres at Sibford and later this became Sibford FERRIS after him. Likewise, Thomas GOHER was given land across the valley which later became known as Sibford GOWER. It is thought that Goher’s name was a French interpretation of the German name Guother. It is somewhat ironic that the Sibfords, typical English villages, owe their names to the French and the Germans. Burdrop, it is thought, originated from ‘Burh’, meaning ‘place near the manor’. 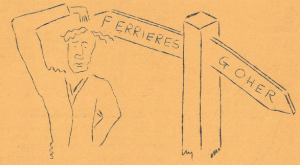 Locally Traitors Ford is believed to have been a place where criminals were tried and then hanged on nearby Gallows Hill. However, just as likely it could mean Traders Ford, being situated on the prehistoric highway. Pound Lane takes its name from the village animal pound, while Temple Mill points to lands given by one Agnes de Sibbeford to the religious sect of Knights Templars of Crusade fame. The Wykham Arms is named quite possibly after the age-old Swalcliffe family of Wykeham, and the Bishop Blaise takes its name from St Blaise. the patron saint of wool weavers.

In documents of the year 1200 there is mention of Eoppan Wyllan (Eoppa’s Well) which is now quite possibly Epwell. Hook Norton is believed to have been Hocca’s Hill, and Swalcliffe, ‘Swallow Cliff’.

So perhaps there is more in a name than at first meets the eye.