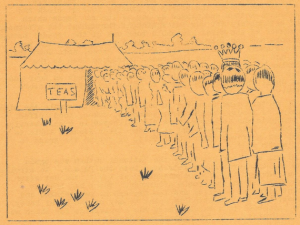 Wearing clothes either borrowed, hired or bought, we were greeted from our younger son, “Who’s that?” With photographs taken before departure for “record purposes”, we duly set off to deposit our family in the safe guardianship of Granny for the afternoon. The elder son was quiet and obviously working things out for himself, for we were nearly at Swerford before he broke his silence and asked “Daddy, are you going to be a clown?” !

Once in London we had to call and pick up some goods for work. Many strange looks in my direction as I stood in morning suit waiting to be served, but no actual comments. Succeeded in obtaining for the first time 10% discount from this particular company. Must dress up more often.

The gates of the Palace were to be opened at 3.15 for 4 p.m. We arrived in the car a few minutes early and already there were long queues formed from the Grand Entrance. Is it polite to turn up before the official opening time, or should one not sit discreetly in the car? We entered by the Hyde Park Corner gate and, having given our passes to the guards on duty, proceeded to stroll along the paths leading to the Palace.

The gardens were not spectacular, but well kept and with sufficient interest and beauty to hold our attention and admiration until the start of the Garden Party. Not so everybody. Some at this stage were already sampling the food and drink.

The Queen, the Queen Mother and the Duke of Edinburgh arrived at the top of the stairs at exactly four 0’clock and the National Anthem was played by one of the two bands which played alternately for our entertainment throughout the afternoon. Each member of the Royal household took one of the ‘roads’ between the people and was introduced to various people along the way. Courtiers would choose a likely person or group, note down their names, and then, when the time came, introduce them to the particular Royal member who would talk to them for several minutes before moving on. This continued for about an hour and a half until the party re-formed to enter the Royal Enclosure for tea.

We at this time departed to our enclosure to sample the wide selection of foods. Sandwiches, pancakes, cakes, iced coffee, tea, lemonade and ice-cream were all collected in a self-service style from a long marquee and then one either found a table to sit at, which proved rather difficult, or sat on the grass to devour one’s food.

At six o’ clock precisely the National Anthem was again played and the Royal Party retreated into the Palace. We strolled back out through the gardens and made our way to the car after a very pleasant and memorable afternoon. There had been no apparent signs of security and the atmosphere was relaxed and informal. We did not actually speak to any of the Royal Party, but to have been to a Garden Party was a privilege for which we shall be grateful for the rest of our days.