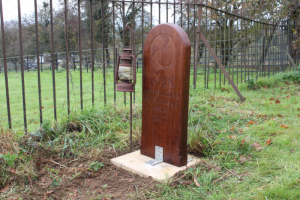 Visitors to the churchyard may have noticed a new headstone. It replaces the overgrown patch marked only by a rusty hurricane lamp on a stake. In 2003, a traveller called John had been living in a tin shed below the Elm Crossroads in the Ferris. After spending a bitter winter in this makeshift home, and through the generosity of passers-by who would take food or some warm clothing, John had become a well-known local figure, and people would often stop at his shack for a chat.

Sadly, one morning in April, he was found to have succumbed to the privations of living in a tiny tin shed with no door, and he had died during the night. Those who had supported him raised the money to pay for his burial in the churchyard, and I carved a wooden headstone to mark the final resting place of ‘ John – a gentleman of the road.

The following ten years took their toll on the hastily sourced and unseasoned oak of the headstone, and so this year I carved a new one out of a lovely old piece of re-cycled teak, and installed it at the beginning of November. John came to us with nothing, and I am pleased that, through the kindness of strangers, he has found his place in God’s Acre.