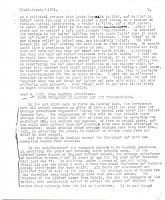 FREE EDUCATION IN BANBURY AND THE NEIGHBOURHOOD.

By the Act which came in force on Tuesday last, the Government made all school managers an offer of 10s. a child per year upon the average attendance registered during the school year ended last before January 1st. The consequence of this will be that schools whose average charge per child was 10s. or less per annum, by accepting the proffered 10s. can abolish any payment of fees or school pence, and can still work without loss and possibly with some small advantage to themselves; while schools whose average charges have been over 10s. will, by accepting the grant, be enabled to reduce their fees per child by that amount.

All the schools in Banbury accept the fee-grant, and, with one exception, become free schools. The exception is the Banbury British Schools. The average attendance on the books of these schools for the school year ended last before January 1st was 407, while the average rate charged upon such attendance was 18s. 5d. Subtracting the 10s. accepted from Government this will leave 8s. 5d. to be raised per child. No child will be admitted without payment, and we are requested to put before the public the following uniform rule of school fees for all children attending these schools, which will come into operation from Monday next:—

The other schools, viz., the National (average attendance 337), Christ Church (304), the Cherwell British, the Grimsbury Wesleyan (224), all throw their schools open free ; although in two, we believe, the average amount was slightly in excess of the ten shillings. From the St. John’s (Roman) Schools we have not heard anything definite, but we are, we think, justified in assuming that they will be free.

In the neighbourhood, the managers appear to be equally unanimous in accepting the grant and throwing their schools open. At the Sibford Gower Church of England Endowed School, the average attendance of children between five and fifteen years of age for the year ended December 31st last was 77. No children under 5 years of age are taken. Nearly all pay one penny per week, a very few small tradesmen and farmers paying three-pence for each child. All books and stationery are provided free of cost to the parents. The average rate of school fee has therefore been considerably less than ten shillings per annum. The trustees of the Sibford Gower Town Estate, who are the managers of the school, have unanimously agreed to accept the fee grant and abolish the school fees entirely from the 1st of September. It is not thought that the abolition of school-fees will improve the attendance, which on the whole, has, for the past year or two, been fairly good and regular. Poverty has in no case been the real cause of irregularity of attendance, where the latter has been a cause of complaint ; the real cause—indifference to the child’s welfare—will not, it is thought, be abolished with the abolition of the school-fee. Among the other places which have at present signified their intention of accepting the free grant and abolishing fees are:—Bodicote (average attendance 114), Adderbury (185), Drayton (26), Hanwell, Warmington, Cropredy (with Great Bourton 97), Wardington (70), Shenington (46), Wigginton (37), Hook Norton (161), Farnborough, Avon Dassett (23), Mollington (25), Aston-le-Walls (Roman Catholic, 13), Great Bourton (Infant School only, 35). Alkerton also accepts the grant with an attendance of 18 but the fees appear to be very considerably over the ten shillings. In nearly all cases the managers of village schools accept the grant at a profit to themselves. Indeed one school in the neighbourhood gains 5s. 9d. per head upon the grant. In these cases the Act does not impose much trouble upon the managers, but where a small excess remains over the 10s. it becomes a matter of some difficulty to know what to do with it. Some local schools we believed have for the present decided to dispose of it by sacrificing the amount and making their schools free. As regards the result of the opening of the schools without fees upon the attendances, important change anticipated. The majority of the school managers gene who have kindly communicated with us, do not venture to express any definite idea as to the alterations which may be expected in this direction. Others think that there should be an increase of regularity, but are doubtful whether such will take place. One gentleman writes in answer to the question whether the adoption of the grant may be expected to increase attendances,—”Not the slightest. The irregulars will be irregular. Irregularity and unpunctuality run in families.” But the right idea is undoubtedly that of a correspondent who writes :—”That depends upon whether the Local Attendance Committee do their duty.” There has, no doubt, been a disinclination on the part of the committees to proceed to stern measures, and this especially with the Committee of the Town Council, when dealing with the poorer districts of the town. The causes of this are now removed, and the words of another correspondent:—”School Attendance Committees have now greater reason for insisting on attendances, and managers ought look more sharply after their interests.” It is to be sincerely hoped that they will. Sections 6 and 7 of the Act, which provide for the grouping of the different schools, do not at present affect this locality.