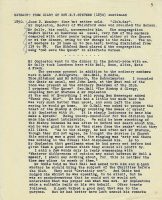 Fine but rather cold. “Club Day”.

Mr Copleston, Rector of Whichford, came and preached the Sermon. Mr Gully, his pupil, accompanied him. The congregation was not quite so numerous as usual, very few of the members compared with other years being present either at the Church or at the dinner, owing to the change in the rules. The number of members is 30 less up to December last, having diminished from 119 to 89. The Sibford Band played and the congregation sang, “God Save the Queen” in alternate verses.

Mr Copleston went to the dinner in the School-room with me. Mr Gully took luncheon here with Bell, Rosa, Alice, Kate and Frank.

The persons present in addition to the ordinary members, were R. Lamb, J. Woolgrove, George Hall, R. Oddie, Thomas Hitchcox and Mr Robinson, the Schoolmaster. I occupied the Chair as usual, and John Lamb, at the East end of the room, was present as the ordinary Chairman of the Club. I proposed “The Queen”, George Hall “The Bishop and Clergy” coupling Rev Mr Stevens and Mr Copleston.

At the end of everything I said, young Ben Messenger added “Thank you, Sir”. He had had a little too much beer but was very much better than usual and soon left the room, saying he would go home. Mr G. Hall was asked to propose the toast of the Bishop and Clergy, coupling the names of myself and Mr. Copleston with it. It is simply ludicrous to hear him make a speech! Being County-Councillor for the division has made him almost intolerable. He said he knew something of the Bishop because he was often in Oxford and heard about him, and he was glad to say he “had risen from the ranks”, which they all liked. As to the clergy, he had often met Mr Stevens; though they did not agree, he thought the Service in Church this morning was a good one, the singing was ‘arty and there was nothing in the ritual that displeased him. As to Mr Copleston, that gentleman whom he had never met before had given them a good sermon which they should all profit by.

I said a few words only in reply commencing with “Whatever differences of opinion may exist between Mr Hall and myself, I shall say nothing about, for this is neither the time nor the place to speak of them.”

Mr. Oddie told me that Hall had asked both him and R. Lamb whether he should bring the subject of the Charities before the Club. They said “Certainly not”. And Oddie had nudged him whilst he was speaking, to be silent, but he was so pachydermatous that he could not or would not understand what was proper and what was not. Mr. Coplestone made a suitable reply on his own behalf. Other toasts followed. R. Lamb talked a good deal that was to the purpose. But he had better have left unsaid his remarks to the effect that the non members should help the club because they ought to be much obliged to the labourers for making some provision for themselves in times of sickness, since if they did not, the non members knew they would have to keep them out of the poor rates! A curious way of encouraging a proper manly spirit of independence among the men! So he (R.L.) was doing all he could for them. The Club has completed 50 years of work but R. Lamb never took the least interest till about two years ago. Mark Barnes who had had perhaps two mugs of beer came towards the west end of the room and said “I’ve come up here because I’ve got a mouthful to say, but whether it is useful or only amusing I can’t say. But I only wanted to remark that if Richard Lamb had joined the club 30 or more years ago, what a lot of good he’d a done it.” His remark was followed with shouts of laughter, in which everyone joined, and R. L. coloured up but made no remark.