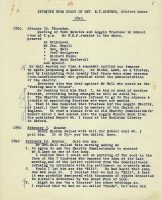 Mr Hall wasted our time and somewhat ruffled our tempers by again proposing a Quaker, Mr Richard Lamb, as a trustee, and by insinuating very openly that there were some persons (non-beneficiaries) who grumbled about the administration of the charity.

Everyone else was dead against Mr Hall who posed as the “Working man’s friend”.

Mr. Jenkins told him that: