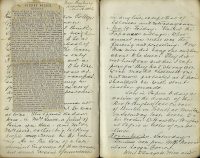 Went to Ludgate Hill and called at Samuel Bros. about an overcoat for Frank.

Returned home. George Burdon was late with the carriage at Banbury.

Received postal card from W. Hawker Hughes at Mentone telling me of his brother’s death.

Maria Walker, executrix of late Eliza Harris, called with Mrs Wilks to ask about certifiacte of death and I told her she must get that from the authorities of the Quakers’ graveyard where she was buried.