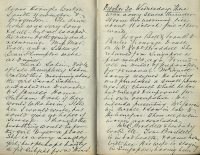 There was a very severe thunderstorm this morning till about 11 o’clock : fine afterwards.

Drove Bell and Frank to Brailes Vicarage to call on Mrs Robert Braddell who returned from Singapore a few weeks ago. Found all in midst of preparation for removal, Mr Smith having resigned the Living and purchased a small house near the church which he has had enlarged and improved for his own occupation. He intends presenting Mr Garrard his curate and son in law to the benefice when all preliminaries are concluded.

Mrs R. Braddell and her baby look ill. Tom Braddell is in bad health, and came home with her. His wife is staying in Singapore, having been only recently confined.