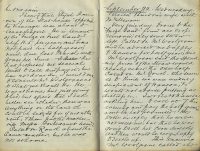 Very find day. Drove to the “Furze Land” found all crop removed; only some straw left. Called on Mr Woolgrove and he advised me to apply to Hancox for half year’s rent. Mr Woolgrove said the spending price of the straw would nearly cover the other half. Called on Mr Routh, who seemed to think we were unduly suspicious of Hancox, and would not advise putting a distress in. I wrote to Hancox asking him to call at 7 this evening and pay the half year’s rent had promised. He wrote in reply that he could not meet me, but that he was going to sell his corn directly and then would be very happy to settle up. This evening Mr Woolgrove called and told me he had learnt that Hancox had removed the straw, having sold it to Soden, of the White House. I therefore wrote a second note to Hancox and told him that I had heard he had sold the straw and should be glad to have his assurance that he had not done so, as it was contrary to his agreement with the Trustees. I told him I would allow proper spending price. For this I received no answer.

Visited Samuel Woolgrove, Joshua Lines, Richard Austin and Mark Barnes whom I cautioned with respect to his daughter’s conduct.

Visited Mr Oddie. He was not in, but I saw Mrs O.

Held choir practice this evening for Harvest Festival next Sunday. There was a very good attendance.