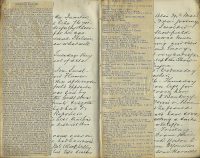 The Tadmarton, Swalcliffe and Sibford Flower Show was held this afternoon in Mr Ainge’s field opposite the church. It was said by the judges to be the best show of flowers, fruits and vegetables that they had had and the newspaper reporters said it was the best that had been held in the district this season.

Mr Gerahty came over in a pony trap he had borrowed, but left early. Mr Aleck Willy (of Epwell) and his two sisters were here to tea. Also Mr MacDermot’s children and their governess and Mr Oddie. I walked round the flower show field with the latter several times during the evening and visited the dancing tent. Everything passed off very satisfactorily. Rosa went up to the show.