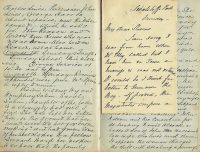 Received appended note from Mr Norris in reply to mine.

I am sorry I was from home when Mr Elley called but I have been in Town on business and was not returned. It would be I think far better to summon the boy. If proved, the Magistrates impose a fine as well as make him pay the damages. Then if you like to appear and beg him off on his payment of the damages, you will have let other boys know that they cannot do this sort of mischief without paying for it. A police officer could hardly, within the four corners of his duty, say anything to boy or parents about paying the damage and no further proceedings taken. I have sent him up to you to get particulars. If the parents come and beg the boy off paying the damages you can then do as you please – but if the case is clear I should have the boy up. This will have effect not only on him but on others.

I have received from the Warden the value of this Living as assigned by Castle. It amounts to £147 per annum and that only if the tenants of farms pay!!!

Visited Widows Henry and Humphrey Sabin. Sarah Sabin, daughter of the latter, is a strangely bad girl I fear. She has left her situation, on the ground that her “hands were too hot for butter making” and had given some of her best clothes to a fellow servant, though her mother is so poor that the family is almost half starved. She has been home ever since club day, and bears a very indifferent reputation for honesty. I spoke very seriously to her, but was very much dissatisfied with her replies to my questions.

Police Constable Justice came up to make enquiries about broken windows. He obtained plenty of evidence sufficient to convict Bishop.

He told me that on Sunday night there was some disorder at Sibford Ferris by some young fellows who had been “lubelling” John Holtom and his concubine for ill-treating Daniel Alcock, a bastard son of John Holtom’s late wife who lived with them. It appears the woman charged the child with stealing a penny and on Saturday evening spoke to the policeman about it. The child ran away and remained out till late. On Sunday they tied him up to a bench in the workshop and placed an open bible before him, giving him only bread and water. The boys heard of this and threatened to pull the place down if they did not set the child free and treat him better. Mr Oddie told me afterwards that Holtom “ran for his life” and took shelter in Austin Hillman’s cottage. The first Mr. Oddie saw or heard of the matter was Holtom jumping or being hurled with force out of Hillman’s cottage. The women there had kicked or pushed him out and he was using fearful language.

“What’s the cause of this, that thou’st taking to gymnastics at thy time of life?” asked the Quaker.

I suppose Holtom’s reply was not suited to ears polite, and Mr. Oddie was much shocked at his conduct; and when Holtom said he would go to the “public” and get some beer to comfort him he strongly urged him but without avail, not to do so. However, he took the opportunity to give him some good advice, and especially with respect to his breaking “the pledge” which he had kept for some time. Mr. Oddie’s remonstrances and the indignation of the boys had a good effect on the treatment of the child. I afterwards spoke to Holtom and the child separately and together and found that matters were improving, for the child told me he had enough to eat and had his food with the other children. Holtom and his woman had, forsooth! formerly made the child take his meals apart from the others as being a “bastard”. But Mr. Oddie told Holtom that his own children were worse than bastards and that as he was responsible for his maintenance, having married the mother, both he and I would watch over the child and take steps to see that he was not ill used, or to punish Holtom and the woman if they did ill use him. I believe his interference and mine, and the terror produced in their minds caused them to treat the child much better. But Miss Capper took the matter up and got the child admitted into Dr. Barnado’s Home at Ilford. Mr. Oddie told her he thought she had done an unwise thing as Holtom was responsible for, and quite able to maintain the boy; and that she must expect his example to be followed by others who wanted to get children taken into Dr. Barnado’s or other Homes.

The policeman also told me that a sheep had been slaughtered in a field at Epwell on Saturday or Sunday night by some person unknown, apparently in revenge on the owner. The miscreant had not been discovered.