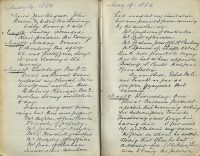 Our Rural Postman presented a petition this morning asking for subscription towards purchasing a new pony, his having died. I promised 10/- and entered my name – the first on whom he called – stating that when he had collected £10 (I believe) he was to bring the petition to me to close the list. I felt it necessary to do this in order to prevent the abuses which have occurred on similar occasions before. I should not have taken eth matter up on this occasion, but the young man has not been appointed very long and he has his blind father to keep and a young brother to look after him.

Rain more or less all day.

Wrote final letter to Fortescue and Sons about Mann and Inns.

Thursday May 6 I wrote my first letter to them. They wrote May 9 asking me to call.

May 10. I called and saw Charles Fortescue.

May 13. they wrote to say they had not heard from Mann and Inns.

May 15. They wrote enclosing copy of Munton & Stockton’s letter saying in effect that they could not accuse me of any dishonourable conduct with respect to church accounts as they were collected and paid by the Churchwarden.

Today I wrote saying that that was practically a denial of having said anything to which I could object but if they had not said something of the sort the matter would not have been talked about as it had. I therefore told Fortescue’s that so far as I was concerned the correspondence was closed : but that I declined to give up my Church Vestry Book to Frederick Inns, as it was not a Parochial Vestry Book – nor a Churchwarden’s Account Book, but a history of the Church and matters connected therewith, and that no-one had written in it but myself. Adding that if F. Inns would bring or send the Church Accounts to me for the past year I would enter them in my book so that they could be referred to when necessary.