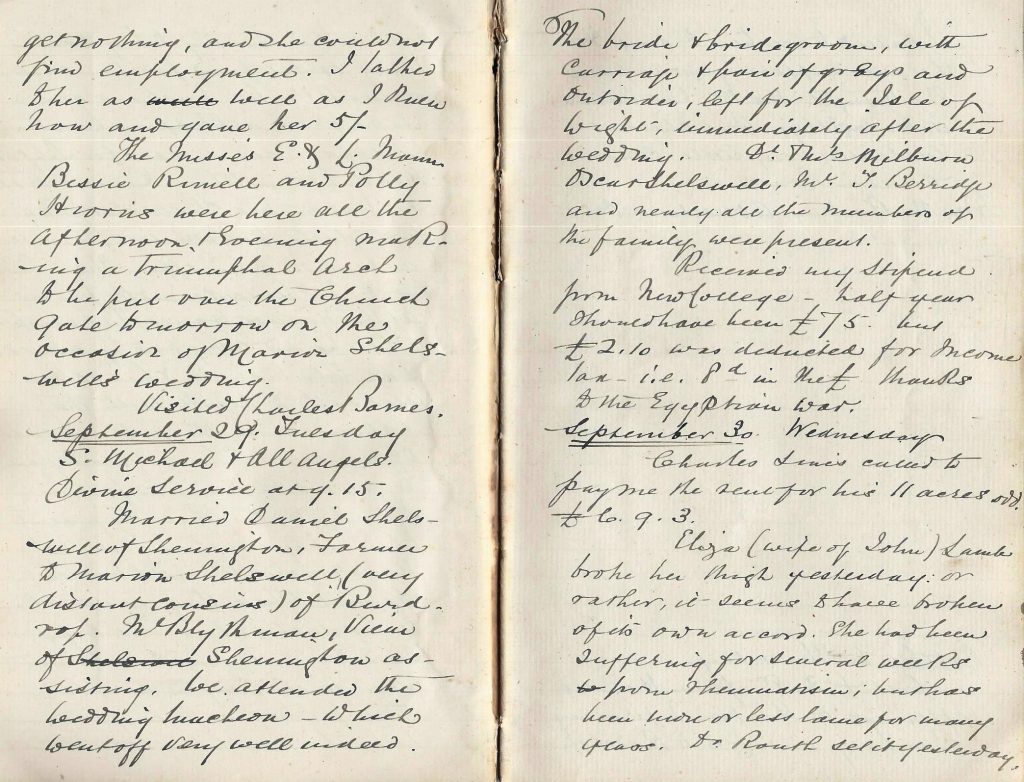 Eliza (wife of John) Lamb broke her thigh yesterday: or rather, it seems to have broken of its own accord. She had been suffering for several weeks from rheumatism; but has been more or less lame for many years. Dr Routh set it yesterday. I called to see her today and she was suffering great pain. She thought the doctor had bound it too tightly. But she has evidently very little confidence in Routh.

From the Banbury Advertiser Oct 1.

HARVEST FESTIVAL.—The annual harvest festival services were held in the church here on Sunday, the 27th inst., commencing with a celebration of the Holy Communion at eight o’clock, followed by a second celebration after morning prayer. Appropriate sermons were preached at the morning and afternoon services by the Vicar, the Rev. Edward T. Stevens, and in addition to these, a fourth service was held in the evening, when the church, which is seated for 500 people, was filled with an earnest and attentive congregation. The sermon, an excellent harvest homily, was preached by the Rev. G. Davies, formerly vicar of Bettws-y-Coed, but now assisting the Rev. Canon Payne at Swalcliffe. The church was decorated with great taste and excellent effect by the ladies of the congregation, and a prettier sight was never seen in Sibford Gower than the church at the evening service, for it was brilliantly illuminated, and the night being calm, the numerous candles burnt with perfect steadiness, so that the beautiful decorations of flowers, evergreens, and fruit were seen to great advantage. Not the least admired of the offerings was a handsome loaf of 16lbs weight, presented by a local baker which, together with the fruit, will be given to the poor widows of the parish during the week. All the services were rendered with great heartiness, and the congregations appeared attentive and devout. The offertories and collections amounted to £6 8s. 3d., consisting of no less than 521 coins, ranging from a farthing to half-a-crown. They will be devoted as usual to the local infirmaries, to which the Sibfords owe much for the assistance afforded to their sick poor. The evening service at the harvest festival here was only an experiment, but was so successful that we shall hope to see it repeated.