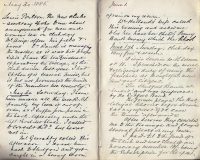 Divine Service with sermon at 11. I preached on the moral and religious duty of using the franchise as thoughtful men and good citizens.

The Shutford Band attended and was reinforced by the Sibford Band.

The former played the Hallelujah Chorus before Service and at my request “God save the Queen” afterwards.

After Service they escorted me to the Vicarage and played several pieces on my lawn.

I paid £1 to the funds of the Club and was elected an honorary member, 13/- being the subscription for the year, 6/- Entrance Fee and 1/- for the book of rules. I did this in order that my subscription might go to the benefit of the Sick Fund and not to the expenses of Club day, and that I might if I feel disposed, attend the quarterly meetings of the Club.

In the afternoon, the Bands, instead of parading the village as hitherto, were stationed in Mr Ainge’s field opposite the Church, where those who chose danced to their hearts’ content. Tea was served under Mr. Routh’s management in the Schoolroom, Misses Dix, Mrs Woolgrove helping. A ticket to admit himself and wife or sister etc was given to each member. The bandsmen also had tickets and all who assisted in the waiting. The cost was £3.12.6 or thereabout which was paid by subscription. I gave 10/-, Mr Oddie 10/-, the Doctor 10/-. But I have not seen a list of subscribers : the Doctor had not it with him when he talked to me about it.

I was not present at the tea, as I took Bell and Frank for a drive through Epwell and Shutford, and we did not get back in time.

Mr. Oddie called in the afternoon with his son Sydney and his donkey which Frank much enjoyed riding round the lawn.

School closed for the week.

We have decided not to have a flower show here this week owing to the sickness here and at Swalcliffe where they have Scarlet Fever.