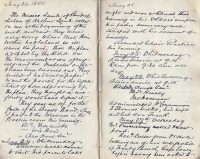 Received letter from Dr Hole telling me of his resignation of Trinity Church, Cape Town and of his having been asked to allow himself to be nominated as Bishop of Natal in succession to Bishop Colenso. Owing to the legal difficulties between the Church of England in South Africa and the South African Church, which is in full communion with the former but declines to accept those decisions of the Courts at home which are binding on the Churchof England, the Archbishop and Bishops have already declined to consecrate to the See of Natal vacant by the death of Dr Colenso. Hole has replied that he will not allow himself to be nominated, but that if the Church Council choose to nominate him and obtain the promise of the Archbishop of Canterbury etc to consecrate him, he will consider it an indication of God’s will that he should accept the charge. I think he has answered wisely. He says they will leave for England in July next.