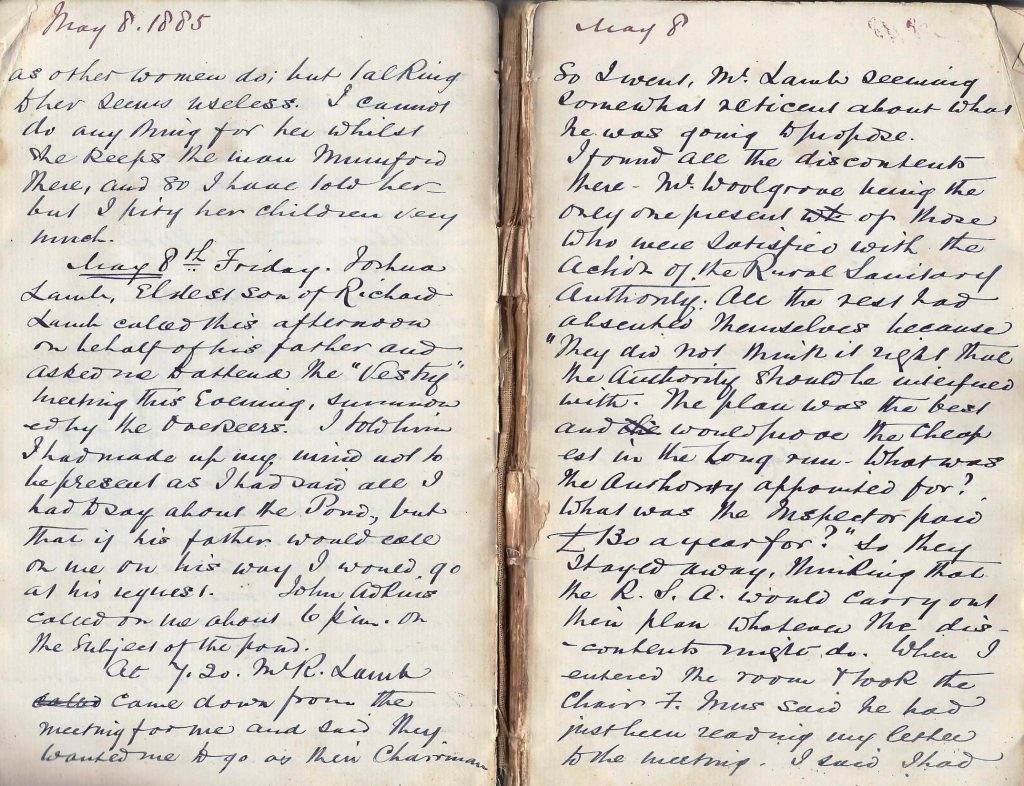 Joshua Lamb, eldest son of Richard Lamb called this afternoon on behalf of his father and asked me to attend the “Vestry” meeting this evening, summoned by the overseers. I told him I had made up my mind not to be present as I had said all I had to say about the Pond, but that if his father would call on me on his way I would go at his request. John Adkins called on me about 6 pm on the subject of the pond.

At 7.20 Mr R Lamb came down from the meeting for me and said they wanted me to go as their chairman so I went, Mr Lamb seeming somewhat reticent about what he was going to propose. I found all the discontents there – Mr Woolgrove being the only one present of those who were satisfied with the action of the Rural Sanitary Authority. All the rest had absented themselves because “they did not think it right that the Authority should be interfered with. The plan was the best and would prove the cheapest in the long run – What was the Authority appointed for? What was the Inspector paid £130 a year for?” So they stayed away, thinking that the R.S.A. would carry out their plan whatever the discontents might do. When I entered the room and took the chair F. Inns said he had just been reading my letter to the meeting. I said I had not intended to be present and should not have been had not Mr Lamb come down for me, because it was not a legal Vestry, not having been summoned for the Vestry room – and that it was for a subject which as a Vestry they had nothing to do. And second because we had already had one meeting on the subject and there must be some limit as to the powers of overseers to call Vestry meetings. Mr R Lamb retreated from his original resolution, viz. to approve of the work ordered by the R.S.A. but to ask them not to provide for cattle going through it.

Inns proposed that the R.S.A. should be requested to allow the pond to be restored to its original condition with mere necessary repairs, and a rough kerb to keep out surface water (nearly 40 tons of mud had been taken out of it.) He has evidently been put forward by Isaac Padbury and A. Lamb because he is fond of talking and does not know when he says a rude thing. This evening he wanted to bring forth a resolution in which my name was mentioned as having “misrepresented” something. I rose at once and told the meeting I would vacate the chair and the room if they wished such a personal attack to be made upon me and they must find another chairman. Inns subsided and apologised at once – saying the resolution had not been drawn up by him and he had hardly had time to look at it. Mr R. Lamb and Mr Mann also protested against any disrespect. In the end Inns’s resolution was carried and R. Lamb, F. Mann, F. Inns and A. Lamb were appointed as a deputation to attend the R.S.A. for I had told the meeting they must not expect me to support at the board that of which I could not approve, and that at the next meeting of the board I should not be able to attend. The meeting passed off very well – Mrs Enock, as usual, taking the opportunity, being the only woman present, to let her voice be heard. We separated in a quite friendly manner; as I told them all that I should be quite satisfied if the pond were made and kept sweet and wholesome and so as not to be dangerous to children or cattle which might get into it.

Mrs Hiorns called and said she had supplied more faggot bands for the Town estate than she had charged for. So I paid her the difference.

The pond was discussed at the Board of Guardians meeting on 14th May. The Banbury Advertiser report of this meeting was pasted into the diaries on 21st May.