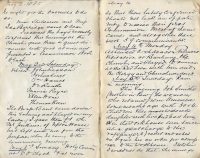 This evening Job Smith’s Mother-in-law (the woman who returned from America some months ago with 3 or 4 children and her widowed daughter with two and has been in the Workhouse ever since at a great charge to the ratepayers) called and asked me to give her an order for admission to the Workhouse. I told her I could not do that, she must go to the relieving officer, but that it was rather too late to go there tonight. She replied that she did not want to go till tomorrow, but that she had no bread for her children. I gave her a shilling. In reply to my enquiries she said she came out of the house last week to make arrangements for her return to America which Mr Ommanney was arranging for her. But doubtless her real reason was to have some fun at the Tadmarton Club. She has been staying with her daughter here in Sibford, where there is barely room for Job Smith and his family, and less accommodation in the way of furniture than of space. On the following Thursday I met her and her children going in.