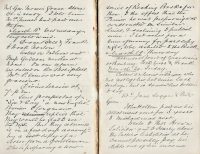 Called on Canon Payne who has not left his bed since last Friday, but is somewhat better today.

John Holtom paid me his allotment rent for 3 years to Michaelmas next.

Wrote to Thomas Brown Solicitor and to Harry about the latter’s liabilities as he cannot possibly pay his debts out of his income and live on the balance – and I have paid them so many times that it has done a great deal towards impoverishing me. He is constantly getting county court summonses and appealing to me at the last extremity when the law charges have to be paid as well as the debt.

Henry Meadows, of Epwell, formerly of Sibford called about a letter he had received from the War Office concerning his late brother George. I wrote a reply for him.