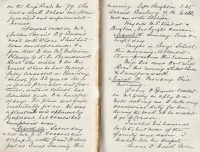 Drove to Epwell and called on Mr. Willy in reply to a note asking me to take any occasional duty for him during the week as he wished to go to London.

I reached his house at 10.45 but none of the family were astir. I waited till he dressed.

Drove to Heath Farm and saw Jesse Bishop and his wife. They want garden wall repaired, range removed from back kitchen, and fence round garden, and house coloured and papered. But he did not give me a satisfactory reply about his proposed Bondsmen.

Drove thence to Brailes with some Four Shire Books. Saw Mr and Mrs Smith. Mr Hunt of the B. and F. Bible Society was there.

Visited Mrs Turner and gave her a receipt for £1.1. the fee for her husband’s tombstone – as she might want to present it among the accounts for his funeral. I told her that I would not take a fee for a tombstone to the memory of a Churchwarden.